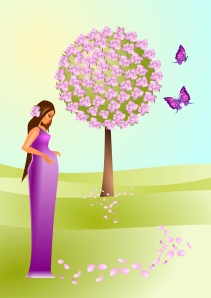 You know those times in life when you have a dream, a vision of something you really want to do, have or be, but however hard you try it just won’t work how you imagined it would?

It’s not easy to walk away and trust that life knows what it’s doing is it?

Sometimes however it’s the only way.

Maybe your timing wasn’t right, or maybe what you think you want and what’s for your highest good are two different things!

It’s usually only when we look back, with the benefit of hindsight, we realise and understand this.

Soren Kierkegaard said (this quote has profoundly affected my life):

“Life can only be understood backwards; but it must be lived forwards.”

Talking about ways to bring new life into our days, takes me back to my quarter of a century in midwifery …

How was your birth?

No, not the birth of your children. YOUR birth.

Was it fast, slow, early, late, complicated, painful – or gentle and unhurried?

Do you even know? Have you ever asked?

I was born at home, which I see as a great gift. My mum may not agree, as she was alone for the whole labour – the midwife only deigned to arrive at the last minute.

From what mum’s told me, the labour was uncomplicated and drug-free. The only part that was a particular ‘problem’, was when the midwife finally came and proceeded to instruct mum not to push, as she hadn’t quite got her equipment ready!

Ridiculous woman. It’s just not something you can forcibly stop, once the baby’s ready. Having said that, entering the strange confines of a hospital whilst in labour can halt progress, but that’s another story …

I do wonder if mum did attempt to resist that forceful expulsive urge. She was only 26 years old, with no-one to support her (my dad was working away). In which case, it’s feasible I got frustrated, as the strength of muscle contractions would’ve been forcing me further down, despite mum holding back.

What has this got to do with anything you may ask? In a previous post I discussed the importance of breathing, and said I’d share this with you.

During our Holistic Life Coach training, we were encouraged to discover more about our birth story. It seems possible for messages to be processed by the brain during the process, which can subconsciously affect our life.

So I can postulate that my fear of being buried alive, and importantly my ‘fear of drowning’ that wasn’t overcome after the white water rafting incident, could have originated from being ‘forced’ to stay longer in the birth canal than necessary, at a crucial point, and feeling suffocated.

It sounds far-fetched, but who knows what information could be hard-wired in our brains?

I’m also aware of being prone to impatience. I figure being held back like that, could be one of the reasons! However, mum’s story is she told the midwife in no uncertain terms she was pushing whether she liked it or not.

I could also picture the fact that my birth was a fairly rapid one, with no obstructions. And I was early! Well, only a week or two, which isn’t exactly ‘early’, in fact it’s well within the parameters of ‘normal’. But I didn’t hang around.  Once I was ready I was coming out!

Mine was a ‘good’ birth. How often is birth in the twenty-first century as gentle, physiological and ‘normal’ as this I wonder?

1/ The Power is around the strength of the contractions, how well nourished is the mother, how well rested is she? What position is she in – lying flat on her back in bed is unlikely to assist the power of labour, though lying on her side if she’s exhausted could. Changing position frequently can also help. Standing up and walking around helps enormously.

2/ The Passenger of course relates to the baby as she/he descends the birth canal – or not! There is an ‘ideal’ position of course, head down and flexed (chin on chest), ‘left occipital anterior’. Or in layman’s terms, on the left side and looking down. In this position the fetus is optimally placed to negotiate the twists and turns of the pelvis. Other positions may birth vaginally, but could cause more challenge.

3/ The Passage relates to the anatomy of the mother’s pelvis. There’s a number of shapes and sizes, the measurements of which drifted out of my head as swiftly as I read them, like most anatomy and physiology! Suffice it to say, some dimensions work well and others not at all.

4/ The PSYCHE – such a vital P, and one that’s not always acknowledged in the production line assembly of birth in a modern, ‘keep to budget, get them through quickly’ labour ward. In a planned home birth the psyche is calm and in control, in a noisy labour ward such as those seen on dramatic TV programmes, adrenaline kicks in and can halt contractions in an instant, leading to a cascade of unnecessary interventions.

Little can be done about the woman’s anatomy, but the other three can be helped to progress in a variety of ways that can literally shift the process from ‘stuck’ to ‘smooth’.

Breathing, as always in life, is crucial.

One of the (sadly many) practices I found extremely distasteful in professionally ‘managed’ childbirth, was encouraging women to take a big breath, hold it, and push forcibly as long as possible until her face was beetroot red and she soon became exhausted.

What also happened during this process is that the oxygen supply to the fetus was interrupted.

When the woman is ‘allowed’ to adopt a position conducive to giving birth, and follows the spontaneous nature of breathing and automatic expulsive efforts, the baby is more often than not born gently and with as little trauma to either party.

No force, letting go and allowing nature to take her course.

You have a dream.

You’ve worked hard to push through the barriers that have been presented to you. But they’re not giving.

It can be frustrating. But continuing in the same direction regardless of the obstacles can be foolish.

Consider what you can change that may lead to a different outcome? Maybe you can look at the dream differently? Or move the timescales you’ve put upon yourself?

Start to consider a change to your mindset …

Or is it time to let go?

If things aren’t moving, then don’t keep forcing it. Because when that happens, when you force against nature, you’re much more likely to encounter an obstructed labour!

Wait a while. Let go of expectation. Be open to possible changes of direction and opportunities that weren’t originally around.

“Don’t push it, don’t force it
Let it happen naturally
It will surely happen
If it was meant to be” ~ Leon Haywood

I’d love to hear your thoughts and experiences of following your dreams. When it worked well, what was different to the times when it didn’t?

As always, if you want to consider a coach to support you to birth your dreams, do get in touch.

If you enjoyed this post, I'd love your feedback and comments :-) Cancel reply

Digital Marketer, travel writer, & blogger. Since September 2020 travelling around New Zealand in a campervan. Liveaboard narrowboater when in the UK.